Discipline, something I thought I had, but quickly realized I didn’t. Posting constantly and making sure I had the right pictures in hopes of gaining  followers. Getting bogged down by the things I couldn’t control. The more I was glued to the Gram, the more I felt overwhelmed. After an aha moment, I realized that a break was much-needed. That’s exactly what I took a break. Breaking away to gather my thoughts, and just to regroup! Unplugging allowed me to see and think clearly, and get back to what mattered most (me and my family). It also helped me to be here writing my first blog post.

If any of you have listened to any of the Ted Talks, you would know why the “why” is so important. When I began Instablogging, I told myself that I would stick to the “plan”. That went quickly out the window when I began to notice those accounts with thousands and tens of thousands of followers. Quickly beginning to follow those concepts thinking it’s going to help me. I immediately allowed myself to be moved by what I saw. This only led to discouragement, and the feeling of defeat. My objective was to never work with brands, but that got lost in the hype that I saw. Before starting know “why” you are doing this and stick to it.

To be honest, I had no idea what that word meant. You’ll be amazed at the things you don’t know until you actually start doing it, lol. I’m still having to do research on this, as it pertains to marketing. Pictures are posted, but the content is nowhere near what it should be to draw your audience. I thought you just came up with random captions, and hope that someone would like it. Wrong!!

4. Be Yourself and Have Fun

This particular one you may see quite often, but it’s a true mantra to live by. People (myself) are looking to connect with people, not robots. This I’ve learned the hard way, being an introvert makes it hard. Instablogging had become a job for me. When it’s a job it becomes stress, but when it’s your passion it’s no longer a job. Sometimes you begin to adjust yourself to fit the approval of others. Comparison is a killer! Don’t put yourself through that torture. Where you are right now, is exactly where you should be. I’m continuing to take steps toward the mark of where I want to be, and I’m proud of my progress!

When I first started this journey, everything seemed so foreign to me (still does). Meeting new people has always been a struggle of mine; being an introvert makes that hard.  You just never know who is for you.  I’ve met and still meeting great women on this journey. Genuinely encouraging you however and whenever they can. I’ve also joined a community of women who have the same love for fashion and are really amazing (Style Collective). They support and encourage to go be the #girlboss you were called to be. I’m grateful that I have a community that I can turn to whenever. 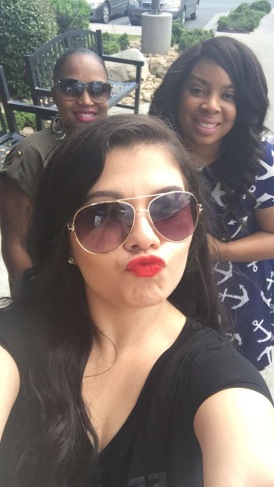 Gabrielle of Pink And Gabulous

What has been some things you’ve learned very quickly when it comes to blogging? Leave your comments below. Until next time you beautiful souls!!

4 thoughts on “5 Things I Quickly Learned While Instablogging”

All thoughts and views expressed on this website and respective social media platforms are my own.